ArtPlay has announced that a new update for Bloodstained: Ritual of the Night releases on May 7th for PS4, Xbox One and PC! The update includes playable Zangetsu and Randomizer feature for the game. This update will release later on Switch in late May/early June. Check out all the details below:

Zangetsu
Once you have completed Bloodstained and gotten the “Good Ending”, you will be able to choose Zangetsu to play through the game a second (or thirtieth) time.
Once selected, players will be able to play through Bloodstained using all of Zangetsu’s movement and combat abilities. Zangetsu is not a shardbinder, so he does not use shards as Miriam did. Instead he uses the power of his sword to dispatch enemies along with some special abilities that consume MP. 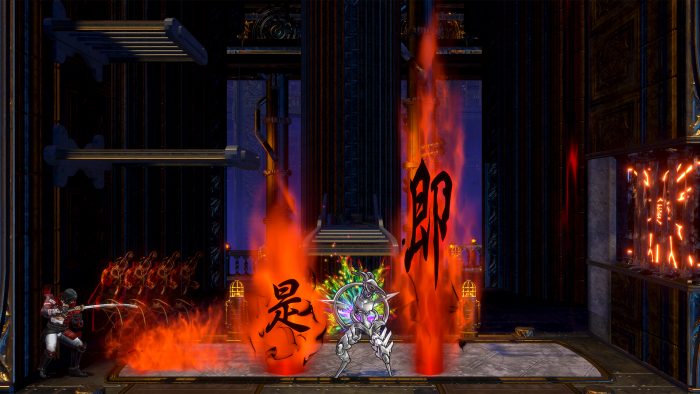 Playing Bloodstained as Zangetsu is designed to be a different experience than playing as Miriam with a focus on fast-paced combat. Consumables, equipment, crafting, treasure chests, quests and story cutscenes are disabled when playing as Zangetsu.

Randomizer
Randomizer allows you to adjust eight different game parameters to mix up your experience as you play through the main story of Bloodstained. You will be able to adjust the goals of their overall playthrough and quests, the location of save and warp rooms, shops, key items and also enemy drops.

For example, you could set up a game where enemy drops (shards & items) are totally mixed up, meaning that you could end up with the ‘Release Toad’ from an ‘Aello’ instead of a Toad.

Finally, you’re able to access the seed of your randomized game in case you want to write it down and keep it for reference or share it with others. The game also provides a timer to track how fast you are able to complete the game, so if you share a seed, you can compare who can complete the course the fastest. 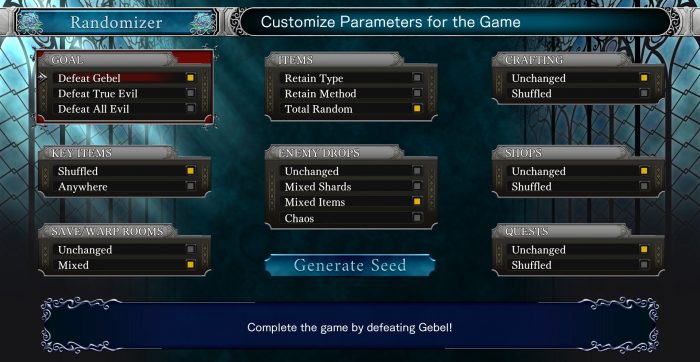 The eight parameters that can be adjusted are:

Goal: This determines the win condition of the given Seed, and in turn has an effect on which items are designated “Key items” and how much of the map will be in play.

Key Items: These are items that are required to complete the playthrough. Other options can further alter these items. Items cannot be randomized in a way that prevents your progress.

* Shuffled: (Default) The Key Items are mixed up, but will always spawn in a Key Item location. Key items you earn from defeating a boss (ex. Double Jump) will still come from a boss – but not the same boss!

* Anywhere: Key items are added to the general item pool and can be found anywhere, depending on settings. With this parameter set, Boss rewards may be minor or even trivial.

* Unchanged: The rooms appear as they do in the core game.

* Mixed: (Default) The Save and Warp rooms are shuffled.

* Retain Type: Items of a certain type, such as weapons, will always spawn where a weapon would spawn. For example, a chest that originally held a Whip may now hold a Rapier, but will never hold an HP consumable.

* Retain Method: Items will always appear from the same method of spawn as they originally did. Ie. Items found in chests will shuffle amongst themselves, items hidden in walls will remain hidden in walls, etc.

* Total Random: (Default) This lets any item spawn anywhere, regardless of the original item in said location. There may be additional limitations based on the other settings.

Enemy Drops: This setting governs anything dropped by enemies.

* Mixed Shards: Enemies can drop any shards. Note if “Retain Type” is selected, this will keep Shards of the same type together (If an enemy drops an Effective Shard, it will now drop a different EffectiveShard).

* Mixed Items: (Default) Only the physical items dropped by an enemy can be randomized. If “Retain Type” is selected, the drops will remain similar to the original setting (A weapon drop is replaced by a weapon drop).

* Chaos: Items and Shards can both be randomly assigned and replaced by anything.

* Shuffled: This distributes Quest Rewards in accordance with the other settings.Quest requirements will remain the same, but rewards are altered. This will obey the “Retain Type” (similar items shuffled in) “Retain Method” (current items are all shuffled amongst themselves) and “Total Random” settings.

* Unchanged: (Default) The shop is unchanged from the main game.

* Shuffled: This will obey the “Retain Type” (similar items shuffled in) “Retain Method” (current items are all shuffled amongst themselves) and “Total Random” settings.

Crafting : This setting affects all the crafting systems, Weapons, Cooking and Shards.

* Unchanged: (Default) The shop is unchanged from the main game.

Saber Interactive says that Switch owners will be surprised by upcoming games, feels there’s “more to get out of the Switch hardware”

Hideo Kojima states that Death Stranding was profitable and recouped development costs, profit is secured for development of his next title

Summer in Mara releasing June 16 for Switch and PC; Xbox One and PS4 versions to follow