Shenmue III has been a long time coming. Fans waited nearly 17 years after completing Shenmue II to see where Ryo’s journey leads next. Years after the E3 2015 reveal, a successful Kickstarter campaign and various delays, Shenmue III is finally available on PS4 and PC. What does the current installment of the Shenmue franchise have in store? What answers and truths will Ryo receive in his journey through Guilin, China? Its time to finally take a look at the long awaited installment in the franchise!

[SPOILER WARNING] For people who haven’t played Shenmue I and II, its important to note that these games should be played in succession as the story is heavily intertwined. Spoilers for Shenmue III will be present in the review below. To avoid these spoilers, please skip The Story Continued portion.

The story continues in a quarry in Guilin, China. Ryo and Shenhua encounter two giant Phoenix and Dragon Mirrors within the quarry. Shenhua translates a tale of two companions found in the quarry. The one who hails from the far east wields the strength to destroy himself or make his wishes come true and the one who guides him. This tale accurately describes Ryo and Shenhua, leading them to seek answers from Shenhua’s father, Yuan. However, Yuan is missing. Ryo arrives at Bailu Village, a walks away from Shenhua’s house. Bailu was a temporary home to Iwao, Ryo’s father who was murdered by Lan Di. Ryo discovers that Yuan and Xu were kidnapped for being stonemasons of phantom river stones. These stones are used to make the Phoenix Mirror, which Lan Di is pursuing. After fighting thugs and uncovering Bailu’s past, Ryo and Shenhua sail to Niaowu to find Yuan.

Niaowu is a thriving port city which is home to the Red Snakes, the gang of thugs that kidnapped Mr. Yuan. Ryo encounters many characters in Niaowu and engages in activities like gambling, arcades, fortune telling and more. The thugs have been harassing shop keepers across the entire town and Ryo catches word of this. He then pursues the Red Snakes and trains even further to improve his kung fu. Along the way, Ryo encounters Lin Shiling, a shrine maiden and Ren Wuying, a friend from the previous game. 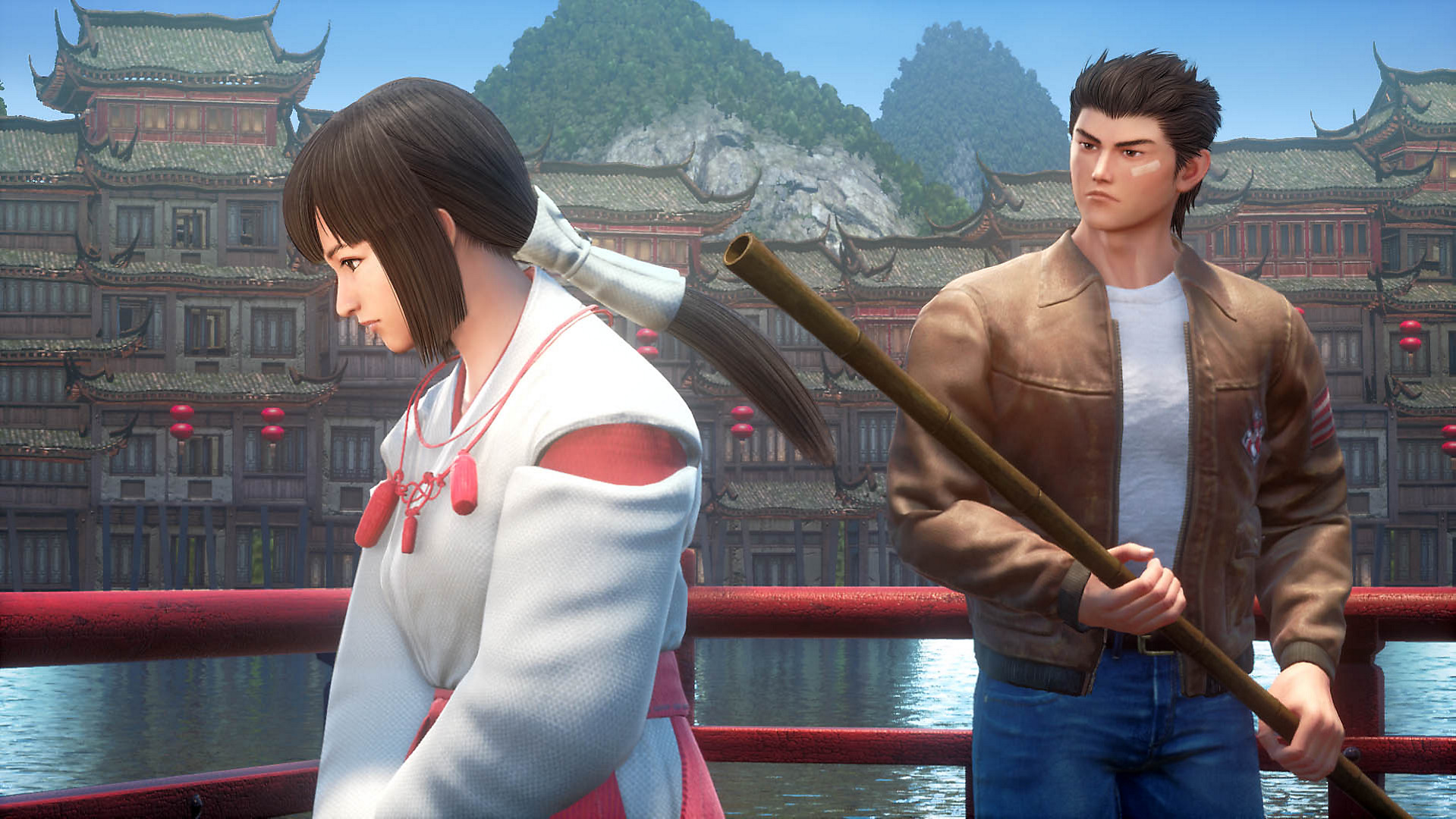 Ryo finally finds the Red Snakes hideout and in an effort to retrieve Yuan, fights the leader of the Red Snakes, Ge. However, he is unsuccessful in two attempts. Ryo and Ren try to hatch a plan to finally defeat Ge. After asking around town to discover Ge’s fighting style, Ryo finally finds and buys a seriously expensive skill book which teaches the Reverse Body Check. Unfortunately, a page is missing from the book. Ryo soon meets Grandmaster Bei and with more training, he is finally able to learn the move.

Upon returning to the Red Snakes hideout, an already bad situation turns worse. Ryo and Ren find the hideout empty except for a woman, Li Feng. Feng states that Shenhua was kidnapped and taken to the old Niaowu castle by the Red Snakes. Ren assembles Shiling and Hsu while Ryo gains a boat from Bei, all setting off for the castle. Ryo finds Yuan and Xu within a cell and allows Bei to protect them while Hsu and Shilling fight off thugs. Ryo and Ren are greeted by Niao Sun, who had disguised herself as Li Feng previously. Sun demands the Phoenix Mirror in exchange for Shenhua. Ryo agrees to the terms and saves Shenhua. Sun then states that Lan Di is present at the castle. Ryo and Ren storm up the old castle in Yakuza-style, defeating the Red Snakes and Ge along the way. 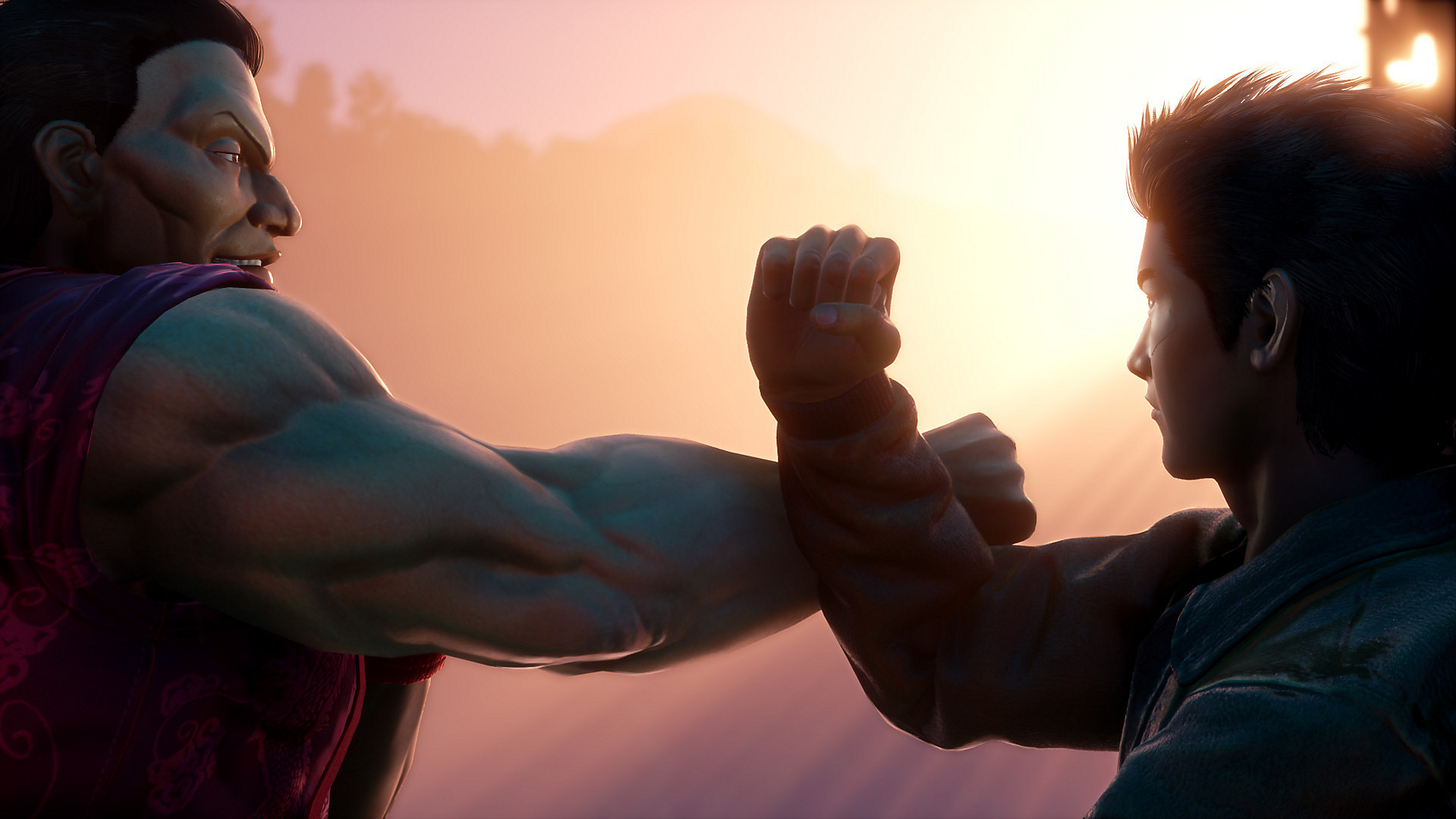 Ryo finally fights Lan Di but stands no chance as Lan Di blocks every single move. At the same time, Niao Sun is lighting the whole entire Niaowu castle on fire in an attempt to usurp Lan Di and become leader of the Chi You Men. Ren saves Ryo’s life by exchanging a fake Phoenix Mirror with Lan Di, quickly throwing it while retrieving Ryo and escaping the castle. Ryo and his friends stare at the burning castle from afar, victorious in their attempt to save Shenhua.

Ryo, Ren and Shenhua finally depart Niaowu with Yuan. Yuan speaks with Ryo, stating that Iwao was entrusted the Mirrors by Lan Di’s father, Zhao Sunming. Sunming died under mysterious circumstances and Yuan points them in the direction of the Cliff Temple which holds more answers that Ryo seeks. The temple is under control of the Chi You Men and Lan Di is said to be heading there next. The game finally ends with Ryo, Ren and Shenhua journeying together toward the old temple. The story goes on…

Shenmue I is dated for its features and design elements but Shenmue II brought Quality of Life improvements for a better experience. Shenmue III continues with improvements across the board considering it’s a current gen title. Players are treated to a rich environment in Bailu Village with load times being heavily reduced as it is one huge seamless area. The same goes for Niaowu although a few load times and pop-in issues are apparent. Niaowu is a giant area and one of the biggest areas in the entire series so far. Luckily for fans and Ryo in the game, the old notebook is back and better than ever! It will make travelling through these towns a bit easier as the notebook keeps track of side-quests, current objects, activities and more.

Fighting in Shenmue III is similar to the previous games but a bit more streamlined with combos. Instead of directional inputs in moves, the fighting style is based around the standard face buttons now(Triangle, Circle, X and Square for example). The fighting system is improved with a slight input buffer similar to fighting games in the current market. An endurance and food system is present for Ryo’s stamina throughout the day, which for some may be annoying to keep track of. Attack and Endurance are stats which feed into an overall Kung Fu level. Training and sparring increase these stats to level up.

Skill books and collecting capsule toys are back from the previous games. Along with this, mini-games, gambling and part-time fork-lifting are back in full swing. For JRPG fans, fishing is available as a time sink to gain money. Herb collecting is a new feature where Ryo may raise money by selling picked herbs or trading herbs for items. Ryo may trade in sets of prizes, capsules and herbs for money, items or skill books. Ryo can finally change his clothing in Shenmue III, so feel free to take off that jacket for once.  Another new and engaging feature is the hotel telephone, which allows Ryo to call characters from the previous games like Goro, Nozomi and Joy to name a few.

Shenmue III has its fair share of shortcomings, which are present throughout the series. Voice acting for Ryo is as faithful as it can get and heartwarming for fans, but may be jarring to newcomers. Newcomers should try Shenmue I to gauge if the game is right for them along with the story. The fighting system is frustrating at times since it’s not as fluid as current action games. Couple this with the constantly decreasing stamina system and it may be annoying to keep up with. However, leveling up through training helps Ryo becomes faster and stronger. Higher endurance allows for higher stamina and more engaging fights. Like previous entries, QTE sequences are slightly unforgiving so don’t expect first try successes. Mundane tasks are back like raising money for an important item to progress the story. These are obstacles that may be off-putting for players wanting to focus on story.

Shenmue III takes roughly 35 to 40 hours to complete depending on how much a player may focus on side quests and activities. Leveling up Ryo and using his skills to progress the game is more satisfying than ever. Completing side quests, playing mini-games and activities add more to the full package. Shenmue III was developed first and foremost to continue the story fans desired for nearly two decades. There’s more in the game to experience while pursuing the truth.

From start to finish, Shenmue fans will most likely love this entry as it’s more Shenmue but better. For newcomers, it may not be a worthwhile experience at all. Shenmue III relies on knowledge of the first two games, as it should for a sequel. Any newcomer wanting to get into Shenmue should give the HD Collection a shot. Overall, Shenmue III brings the past and present together for a compelling experience. Ryo’s journey is revived for past and newer fans to engage in.

[Disclaimer] This product was purchased by the reviewer and not given as a review copy by YS NET or Deep Silver.

Shenmue III Review: A Journey RevivedShenmue III is a real treat for fans and the best entry in the series so far. Improvements push the series in the right direction but it's not very friendly for newcomers. However, the overall game is an engaging experience from start to finish. It delivers what was promised by YS NET as the next chapter of the series.
Twitter