It’s been nearly three years since the first chapter release of Toby Fox’s successor to his hit game Undertale, Deltarune. While he’s tossed around a few snippets of things to expect in Chapter 2, nothing concrete was really told- until now! During the Undertale 6th anniversary concert tonight, Toby revealed that Deltarune Chapter 2 is coming very, very soon. In fact, it’s in only two days. 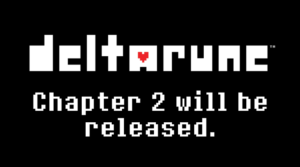 You can check out the first chapter of Deltarune right now to get caught up or reacquainted with the game before Chapter 2 releases for free on September 17th. It will be released at 8PM EST / 5PM PST. Lastly, Deltarune is available on PC via its own website, Switch, and PS4. Stay tuned at Final Weapon for more in the latest gaming news and updates!

diceb0mb
Heya, I'm Ryan, Twitter resident Mega Man nerd and lover of obscure niche games that nobody cares about. I've been gaming since I played Pokémon Emerald on the GBA, and my history is primarily Nintendo and Sony. I've been doing games journalism since 2019!

Deltarune Chapter 2 controller fix update is out now on PC

Deltarune: Chapter 2 is available for free on PC and Mac now, with additional information regarding the releases of Chapters 3, 4, and 5