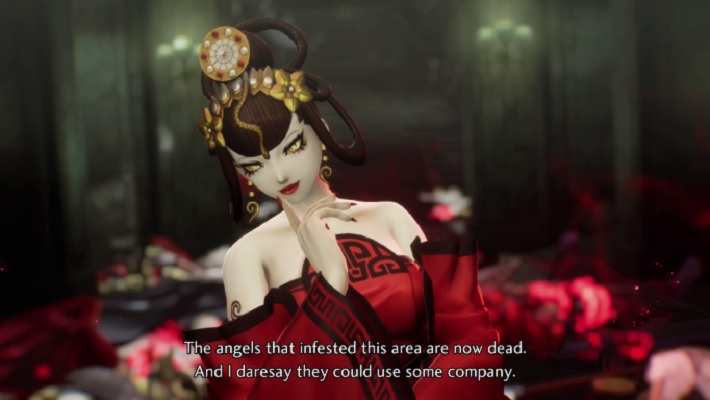 Atlus shared new screenshots for Shin Megami Tensei V alongside recapping information from the latest volume of MegaTen news. Check out the new screenshots below, courtesy of Gematsu:

In 1992, the very first Shin Megami Tensei title was released to the world. The dark narrative that delved into anarchic themes uncommon in games at the time, paired with the innovative battle system where players recruit demons and gods to fight alongside them, led the game and series to gain a cult following. The critically acclaimed Persona and Devil Summoner series all began from here.

Now, in 2021, the newest installment of the series, Shin Megami Tensei V, will deliver an all-new demonic experience that fully utilizes the high-quality graphics that a modern console brings, while staying true to the series’ roots.

A mysterious man who stands in the way of the protagonist as he advances through Da’at. He calls himself an exterminator of demons, though his motives and true allegiance remain unknown. His only partner is Nuwa, a demon herself.

A goddess that appears in Chinese mythology. She’s worked alongside Yakumo since he was young to fulfill a certain goal. She confronts the protagonist without warning or mercy.

The archangel in command of Bethel’s main branch. Stern and uncompromising, she uses her overwhelming power to eradicate anyone who threatens the aims of Bethel. She’s fervently devoted to God, and is committed to defending His order at all costs.

While exploring Da’at, you will encounter over 200 types of demons. Aside from the classics, several new demons will appear, designed by character designer Masayuki Doi.

You can talk to enemy demons to turn them into an ally instead. Demons all have their own personalities and quirks, and this game will feature all-new behavioral patterns.  It is said that the temperaments of demons also are influenced by moon phases, particularly beneath full and new moons. Demons are hard to read and harder to convince, but taking chances with outlandish responses is part of the fun.

In addition, having certain demons in your party may lead to special conversations with enemy demons you encounter. Certain demons that share mythological connections sometimes seem to recognize each other; experiment, and you may be surprised by what ensues.

Demon fusion allows you to combine two demons to create a new one. Aside from the basic two-demon fusion, you can also perform “reverse fusion”, where you’re able to see the results first and select the necessary demons accordingly; special fusions, which involve fusing two-to-four demons to create even stronger ones; and elemental fusions, which allow you to upgrade or downgrade to another demon within the same family. Fusing allows you to transfer your favorite skills freely into newer demons (aside from a few exceptions)—visit Sophia in the World of Shadows to create your own unique, powerful demon!

—Create Your Own Demon!

As you explore Da’at, you will come across Essences– spiritual cores imbued with the power of demons. You may receive essences from specific demons—for example, Pixie’s Essence from a Pixie—and they are infused with the skills and affinities of that demon. By fusing them with the protagonist, you can customize his skills and affinities to your liking. You can even fuse them with demons in your party to tailor their skills too!

In Da’at, you can also obtain Glory, a manifestation of divine dignity. You can spend Glory to learn Miracles when you visit the World of Shadows. Miracles are said to be powerful abilities that alter the laws of nature, and they encompass a variety of skills that can assist you in battle, negotiations, demon fusions, skill potentials, and even stat-building. Strengthen the protagonist by collecting Glory and learning Miracles.